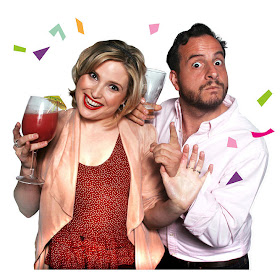 Believe it or not there is a world premiere happening right now at the Old 505 Theatre in Sydney.  If you have never been to the Old 505 Theatre well you could be forgiven for not knowing its existence. It is hidden in a block, you have to buzz to enter the building and then make your way through the graffiti ridden corridors. It really is something you have to see to believe.
When you get there, if you get there, is it worth seeing Sidekicks. Well, yes! It is quite a complexly written play and certainly put the actors through their paces. There are only two and they are expected to play multiple characters, male and female. They have accents from a variety of different countries and they are almost on the stage for the entire length of the show. It was brilliantly cast with Emily Rose Brennan playing CB/ Hunter/ Marius and Marilla and Dan Ilic playing Mac/ Robyn and Tippi.
CB and Mac are both sidekicks, it that they both have friends Hunter and Robyn who they believe are ‘better’ than they are, they look up and look out for them. The play revolves around the characters how they meet and fall in and out of love. CB doesn't believe she is a Sidekick and want to solicit the help of Mac to save the day.  The story itself is very simple but the way it is told through short scene it what makes it more complex and it keeps it more interesting for the audience.  The actual script was well written and seemed very natural to the characters. There is a good dose of humour in the play along with a very funny sex scene!
The staging was very simple one bench and two screens; there was good use of a projector which depicted different scenes to give the audience a bit of a hint as to the venue. I did like the adhoc-mounting platform for the projector!

You can catch Sideskick at the Old 505 Theatre until 18 November, click here for more info.
Philippa at 14:45
Share